Written by Liv, one of the End Child Poverty Youth Ambassadors.

With this year’s childhood poverty statistics highlighting how 3.6 million children are living in poverty, I wanted to contribute my young person’s perspective on what reality is like growing up in a deprived household.

From a young age I have always been acutely aware of my own social standing. Going to 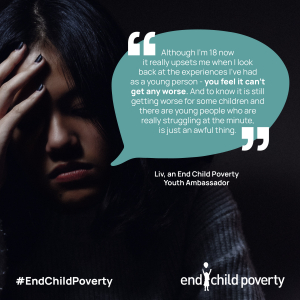 the local primary school in the middle of my council estate, I was surrounded by other young people, just like me. We all had a mutual understanding of some of the sacrifices that our parents were making, we could all tell who had come to school without having anything to eat and all shared a mutual frustration of being unable to help each other. I now hold all the guilt of knowing only two of our class have progressed to university come September. 23 of the talented, creative and hugely intelligent young people are now stuck in the poverty cycle just like their parents before them.

Whilst in high school I had real difficulties creating friendships. My mum worked shifts in a restaurant and the unaffordable cost of childcare meant that we had to go with her. Because my mum was on a 0 hours contract on minimum wage, I could never create concrete plans to go out and see anybody, and therefore relied upon the short 15 and 30 min breaks to establish friendships. Ultimately, this led to me acting out in class in a way to generate attention and gain friendships. By the end of year nine I was sent to an alternative provision, also known as a ‘behaviour school’. It was only until very recently that I was able to link my experience of child poverty and my behaviour in high school.

Whilst in my second high school, my mum had found more stable employment and I had come off of free school meals. I had begun performing significantly better in school and had never been in any real trouble in school. Whilst simultaneously, in year 10 my school had established its own ‘food pantry’ in which we were encouraged to bring in food for them to distribute food parcels before we all went on half term. I will forever be haunted by my head of year telling me that the only reason why he was in school during the early first few days of Covid emerging whilst other schools were closed was because “otherwise some of these kids wont get their scran” referring to free school meals. Although my life was improving and there was less of a struggle as previously, it was a horrible reminder that not everybody was as lucky.

For many, it is often difficult to fully sympathise with the struggles of growing up poor. This was something I very quickly established whilst moving up to further education surrounded by individuals who have never felt the gilt of knowing your mum has sacrificed her own meal so that you could have yours, or the shame attached with being one of a few individuals in school alone whilst everyone is out on a school trip in which you could not afford. For the individuals I am now surrounded with in my sixth form college, their parents biggest sacrifice is spending money on a tutor for them.

It is a hard pill to swallow knowing that the issues you faced growing up are still rife today. I walk to college everyday passing children from my primary school with broken school shoes looking absolutely shattered as though they have not had anything to eat.

There is a narrative that the parents of those growing up in child poverty are lazy, and do not work hard enough and so therefore their children must ‘deserve’ to grow up so deprived. My single mother is the hardest worker I have ever known, I am so proud of the sacrifices she has made to get to where she is today. To suggest that she is lazy is an insult and undermines the experiences and challenges I faced whilst growing up.

The impact of growing up in poverty will stay with me forever and that is why I wanted to contribute my experiences in this blog post to ensure that policy makers and those without lived experience can have a greater insight into the struggles of growing up poor. My story is not exclusive to me, it’s one of many and I hope that by sharing a small insight into the difficulties I, and the children I have grown up with, motivates decision makers to do more – no young person deserves to grow up in poverty.

You can find out more about the local child poverty statistics here.

5 things we have learnt from the local child poverty data for 2021/22Growing up in London
Scroll to top
We use cookies on our website to give you the most relevant experience by remembering your preferences and repeat visits. By clicking “Accept All”, you consent to the use of ALL the cookies. You may also visit "Cookie Settings" to provide a controlled consent. More Info
Cookie SettingsAccept All
Cookies

This website uses cookies to improve your experience while you navigate through the website. Out of these, the cookies that are categorized as necessary are stored on your browser as they are essential for the working of basic functionalities of the website. We also use third-party cookies that help us analyze and understand how you use this website. These cookies will be stored in your browser only with your consent. You also have the option to opt-out of these cookies. But opting out of some of these cookies may affect your browsing experience.
Necessary Always Enabled
Necessary cookies are absolutely essential for the website to function properly. These cookies ensure basic functionalities and security features of the website, anonymously.
Functional
Functional cookies help to perform certain functionalities like sharing the content of the website on social media platforms, collect feedbacks, and other third-party features.
Performance
Performance cookies are used to understand and analyze the key performance indexes of the website which helps in delivering a better user experience for the visitors.
Analytics
Analytical cookies are used to understand how visitors interact with the website. These cookies help provide information on metrics the number of visitors, bounce rate, traffic source, etc.
Advertisement
Advertisement cookies are used to provide visitors with relevant ads and marketing campaigns. These cookies track visitors across websites and collect information to provide customized ads.
Others
Other uncategorized cookies are those that are being analyzed and have not been classified into a category as yet.
SAVE & ACCEPT